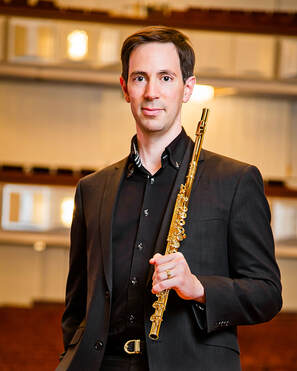 Aaron Goldman, Flute
Aaron Goldman, Principal Flute of the National Symphony Orchestra since January 2013, joined the NSO as Assistant Principal Flute in September 2006. Prior to joining the NSO, he was Principal Flute of the Orlando Philharmonic Orchestra and has since performed as guest principal with the Baltimore Symphony.
An active soloist and chamber musician, Mr. Goldman has been featured with the Amadeus Chamber Orchestra, Virginia Chamber Orchestra, Orlando Philharmonic, the Chamber Orchestra of Florida, and has since performed at several National Flute Association annual conventions. He appears as part of the Kennedy Center Chamber Players, and is active in NSO In Your Neighborhood, the NSO signature community engagement project. He has also performed with the Eclipse Chamber Orchestra, the National Chamber Players, the 21st Century Consort, the Smithsonian Chamber Orchestra, and participated in many educational programs with the NSO, including performances in the Family and Terrace Theaters. He has given lectures at the Carnegie Institute, and the Smithsonian Institution, such as The Magical Flute and Math and Music: Closer Than You Think alongside former NSO cellist Yvonne Caruthers.
Mr. Goldman received his Bachelor of Music degree from the Eastman School of Music in Rochester, NY and is on the faculty of the University of Maryland.
Mr. Goldman performs on a 24K gold flute made by Muramatsu Flute in Japan.