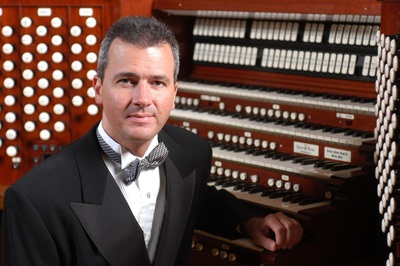 Collaboration with other artists plays a major role in Morrison’s career.  For over a decade he toured with his mother, pianist Jeannine Morrison, performing major works and transcriptions for piano and organ.  They were featured at the 2006 National AGO Convention in Chicago and recorded a CD (“Festive Duo”) in Spivey Hall.  In Philadelphia he has collaborated with all the major choral ensembles: Choral Arts Philadelphia, The Philadelphia Singers, Mendelssohn Club, and Singing City.  He has also appeared with Dolce Suono Ensemble several times as harpsichordist and organist.  As a pianist he has been featured as concerto soloist performing works such as Rachmaninoff’s Rhapsody on a Theme of Paganini, Gershwin’s Concerto in F (both with the DeKalb Symphony conducted by Fyodor Cherniavsky), Mozart’s Concerto for Two Pianos and Three Pianos (Atlanta Chamber Symphony conducted by Juan Ramirez), Beethoven’s Choral Fantasy (Chamber Orchestra of Philadelphia conducted by Jeffery Brillhart), and Gillingham’s Concerto for Piano and Percussion Orchestra (Orlando, FL).  As winner of the GMEA Concerto Competition he performed the Piano Concerto #1 by Shostakovich (Larry Newland conducting the Georgia All State Orchestra) which was broadcast on TV.  Other TV appearances include two episodes of Mister Rogers’ Neighborhood as both pianist and organist.  He was subsequently invited to play for his memorial service at Heinz Hall in Pittsburgh where other guests included Yo-Yo Ma, Hillary Hahn and Isaac Stern.  He currently collaborates regularly with The Orlando Chambers Soloists as a founding member.  They have recently received awards from Chamber Music America and National Endowment for the Arts.  He has also partnered several times with renowned cellist Andres Diaz at Brevard Music Festival and Spivey Hall among other venues playing major works of Rachmaninoff, Martinu, Lutosalwski, and Debussy.
A champion of American composers, Alan Morrison has premiered important new works by William Bolcom, Dan Locklair, Emily Maxson-Porter, Mary Beth Bennett, Eric Sessler, Kyle Smith, Jon Spong, Brent Weaver, as well as the American premier of Dances for Organ and Orchestra by Bob Chilcott.  One of Morrison’s CD recordings, “American Voyage” features an all-American program with works by Creston, King, Crozier, Locklair, Stover and Sessler.  His numerous CD recordings are currently available through the internet or on iTunes.

Morrison has been chosen by his peers to perform for four national conventions of the AGO (Atlanta ’92, New York City ’96, Philadelphia ’02 and Chicago ’06) as well as numerous regional conventions.  In his student years he captured First Prize in numerous organ competitions including the Arthur Poister National Organ Playing Competition (1991) and the Clarence Mader National Organ Competition (1991) which offered the highest cash prize of any US competition at that time.  He also won the Silver Medal at the 1994 Calgary International Organ Festival and Competition.

In 2002, Alan Morrison was appointed head of the organ department at the world renowned conservatory, The Curtis Institute of Music, where he holds the Haas Charitable Trust Chair in Organ Studies.  He has served as College Organist at Ursinus College in Collegeville, PA since 1995 and was most recently appointed Organist-in-Residence at Spivey Hall where he holds the McGhehee Family Organist Residency.  A graduate of both Curtis Institute of Music (BMus in Organ and MMus in Piano Accompanying) and Juilliard School of Music (Professional Studies in Organ), his teachers were Sarah Martin, Cherry Rhodes and John Weaver (organ) and Robert Harvey, Vladimir Sokoloff and Susan Starr (piano).
Alan Morrison is under the exclusive management of Karen McFarlane Artists, Inc. (Cleveland).