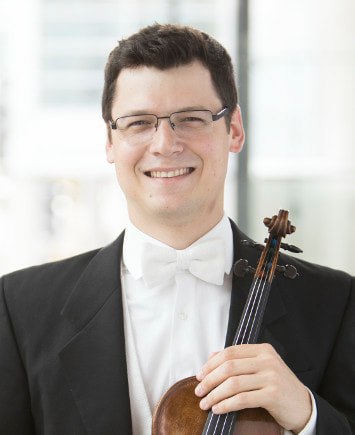 Ben Odhner, Violin
Ben Odhner joined the Minnesota Orchestra at the beginning of the 2017-18 season. He won a section violin position with the Colorado Symphony in 2014 and held the position of fixed 4th chair in the first violin section since 2015. He has appeared as a soloist with the Cleveland Institute of Music Orchestra, Ashland Symphony, Warminster Symphony Orchestra and other ensembles. In 2008 and 2009, he was selected to participate in the New York String Orchestra Seminar at Carnegie Hall. A fellowship recipient at the Aspen Music Festival and School, he has been concertmaster of the Aspen Sinfonia and the Aspen Concert Orchestra. He was also a member of the YouTube Symphony Orchestra, which performed at Carnegie Hall in April 2009 as a part of the first international classical music summit brought together through the internet.
Odhner started his violin studies at age five in Michigan. He received his bachelor’s degree from the Cleveland Institute of Music and his master’s degree at Rice University’s Shepherd School of Music, studying with Paul Kantor. He has been featured on NPR’s From the Top as part of the Gray Charitable Trust Piano Trio and appears frequently in concert at the Glencairn Museum in Bryn Athyn, Pennsylvania. Throughout his studies, he received generous scholarship funding from the D.R. Starling Foundation.