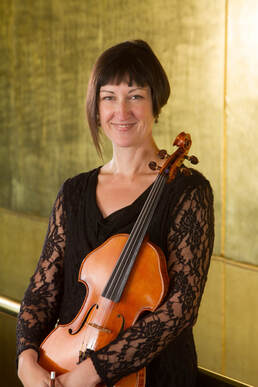 Julie Edwards, Viola
Born and raised in Rapid City, South Dakota, Julie Edwards began studying viola in the public schools at age 9. Encouraged at age 10 by her orchestra instructor not to quit viola and switch to flute, because “Everyone needs violas, if you play viola you’ll always have work, but flute players are a dime a dozen,” Julie made up her mind to pursue a career in viola and went on to receive Bachelor’s and Master’s Degrees in viola performance from Indiana University, where she studied with Atar Arad. After college, Julie began a series of moves that took her to locations that needed violas, including Chicago and Pittsburgh, and became a member of The Louisville Orchestra. Julie is currently a violist in the Utah Symphony, and hopes that everyone still needs violas.
Julie was elected by her musician colleagues to represent them on the USUO Board of Trustees and Executive Committee for a two-year term beginning September 2019.