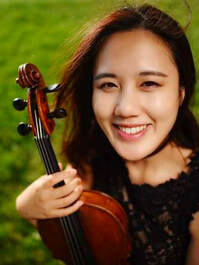 Hyobi Sim, Viola
A native Korean, violist Hyobi Sim is a full-time member of The Saint Paul Chamber Orchestra. She began the study of viola at the age of 12. She won prizes at Tertis International Viola Competition, Music Chunchu Competition and Seoul Arts Center Competition.
Sim has recently made solo appearances with the Saint Paul Chamber Orchestra where she performed the Italian Serenade by Hugo Wolf and the Sinfonia Concertante by Mozart. She also had solo appearances with many other orchestras such as the Czech Philharmonic Orchestra, Gyungki Philharmonic Orchestra, Gyungchal Symphony Orchestra, Curtis Institute Orchestra along with several more.
As an active chamber musician, Sim recently performed with members of the Accordo in Minnesota and performs with Kumho Asiana Soloists Ensemble regularly. She was selected as a member of the “Curtis on Tour” ensemble where she performed in Detroit, California, Maine, Chicago and Philadelphia. She also premiered a sonata written for viola and piano by composer Daniel Shapiro. Other recent performances include the “All in the Family” concert at the 92ndStreet Y in New York in addition to performances with great musicians: Steven Tenebom, Ida Kavafian, Peter Wiley, Steven Isserlis, Jeremy Denk, Michael Kannen, Daniel Phillips, Pamela Frank and Roger Tapping.
Sim is a graduate of the Curtis Institute of Music, Juilliard School and the Peabody Institute of Music. She studied with Roberto Diaz, Misha Amory, Hsin-Yun Huang and CJ Chang.