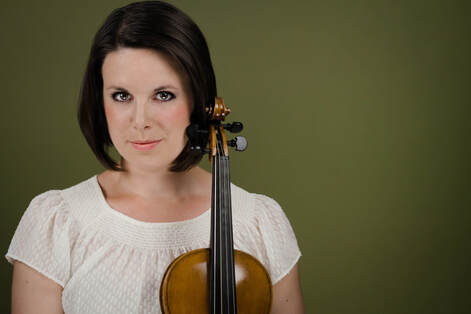 Praised for her ‘impeccable tone, pitch, dynamics and phrasing’, violinist Rebecca Harris performs on both period and modern instruments. Her artistic life is a love letter to the powerful and luminous voice of her instrument, from its inception to the present day.
Rebecca’s obsessions with style and history began in childhood, and have developed into a way of life: she is in demand as a soloist, chamber musician and orchestral leader in the field of historically informed performance, and pursues a concurrent commitment to the performance of new music. Rebecca appears regularly in recital, and in recent seasons has curated and performed programs for the PhilaLandmarks Early Music Series and Tempesta di Mare’s Artist Recital Series, and in collaboration with the Museum of the American Revolution in Philadelphia. In 2018 released a solo album, A String Mysterious, featuring music by Heinrich Biber, and new works by Riho Esko Maimets and Mark Rimple. Highlights of the 2018-19 season include performances at the Institute of Contemporary Art (Philadelphia) as part of the exhibit Introducing Tony Conrad: A Retrospective, and with the Al-Bustan Ensemble, presented by Princeton University’s Department of Near Eastern Studies.
Rebecca serves as Principal Second Violin of Tempesta di Mare, with whom she also tours as a member of the Chamber Players and records for Chandos. Rebecca has appeared with early music ensembles across the United States, including Piffaro, Washington Bach Consort, Rebel Baroque Orchestra (New York), Musica Redemptor (Austin), Spire Chamber Ensemble (Kansas City), The Raritan Players, Handel Choir of Baltimore, The Dryden Ensemble, and Nassau Sinfonia (Princeton).
A abiding passion for poetry and literature has led Rebecca to cultivate close ties with vocalists and vocal ensembles. She has enjoyed a collaborative recording and performing relationship with The Crossing, appearing on the ensemble’s 2018 GRAMMY award winning release of Lansing McLoskey’s Zealot Canticles, and 2016 GRAMMY nominated recording of Thomas Lloyd’s Bonoheffer. Her discography includes world premiere recordings of works by David Ludwig, Melissa Dunphy, and Andrew Lipke.
Rebecca joined the violin faculty of the Curtis Summerfest Young Artist Summer Program in 2014, and is a member of the Teaching Artist faculty of The Philadelphia Orchestra’s School Partnership Program. She joined the roster of the Chamber Music Festival of the Black Hills (South Dakota) in 2018, performing for communities in the Rapid City area in addition to main series concerts. For LiveConnections, Rebecca has collaboratively designed and performed cross-genre educational programs for young people in the Philadelphia region.
Rebecca is a graduate of the Royal Northern College of Music (Manchester, United Kingdom) where she studied with Richard Ireland, after initial studies as a scholar in the specialist music program at Wells Cathedral School, and is an alumna of the Britten Pears Young Artist Program. She is indebted to the charity of Joanna Scott and Others for the generous bursary that enabled her to purchase a violin by Glen Collins in 2006, and also performs on a violin by Sebastian Dalinger (Vienna, 1794).